Got some drawings scanned onto your computer? Made the most awesome Signature you've ever made? Maybe you've used Photoshop or Gimp to your advantage? Well this thread's for you!

If you have an awesome image to post, which you've made / drawn, then do eet! I'm sure the Church Community needs a thread like this. *nods*. So, I've got a new one here.

The one I've attatched here is of one of the crystal mines in the Temple of Earth in Deepholm! (WoW Obviously). It started off as an animal carcas, and kinda ... developed into awesomeness. Let me know if the link doesn't work.

This is an image I found in the interwebs and edited to make it look more like Lauf. Blonde hair, blue eyes and added purple clothing. Because every Lauf loves purple. 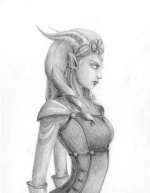 So, I used to spend a lot of time on myspace roleplaying as various anime characters as well as coming up with my own original characters for things such as Bleach, Naruto and Final Fantasy 7 roleplay. I also used to work for a friend on myspace, helping with edits for other people for their characters. I'll include some examples:

These were all manga scans that I was asked to edit...I also used to edit the Bleach ones for fun, just to practice my photoshop skills :p

I also used to make profile layouts for people:

I would code them for people also

And then, here are some of my own edits, for my own characters :p

(Using Tomoe from Queen's Blade as a basis)

(the original Kanu image, so you can see the difference =D)

Some people would also ask for flashing edits...I figured out how to do them on photoshop and this was my first attempt:

I have lots more, but those are some of my best...so if you ever want a pic made of your character...I'm proud of my photoshop skills xD
Ronath

That Kanu Unchou, looks like she if from a very specific kind of anime, huh? But that aside, it is some nice editing really. Im pretty interested in such things as well but unfortunatelly I rarely remember to try some of editing or so when I have free time, or Im just busying myself with something else. You are definitely miles ahead of me in this field. Also, thumbs up for liking Bleach, Naturo and Final Fantasy.
Katenka

Ronath wrote:That Kanu Unchou, looks like she if from a very specific kind of anime, huh? But that aside, it is some nice editing really. Im pretty interested in such things as well but unfortunatelly I rarely remember to try some of editing or so when I have free time, or Im just busying myself with something else. You are definitely miles ahead of me in this field. Also, thumbs up for liking Bleach, Naturo and Final Fantasy.

Kanu Unchou is from Ikki Tousen...known as Battle Vixens here in the UK as that's what the manga is called. It's based on figures from the warring era of Japan, reborn into the bodies high school girls. There is a lot of fan service, but the fighting and the first and second seasons were exceptional. Sousou, based on Cao Cao is the only male. If anyone has played Dynasty Warriors, the characters in that are also base don the same period. Guan Yu, the figure Kanu represents is still celebrated in Japan today...I found it quite fascinating =D. It did take a long time for me to practice the techniques I've used in these edits...some of the manga scans took me the best part of 6 hours to complete. But the ones of Byakuya and Renji I enjoyed doing because they're my fave characters in Bleach. Oddly enough, Sephiroth is my favourite 'bad' guy of all time, but I haven't edited many pics of him o.o
Skye

Lauf. The characters in the picture with lauf's younger sister and all that are Mandy and Mini from the Grim Tales fanfic. It's about as good as fanfics get so check it out here on SNAFU. The guy Bleedman's very good at what he does.

http://grim.snafu-comics.com/?comic_id=0 - Doubtless this is the best work by Bleedman in terms of writing. It is a very cruel take on some of the more recognised nostalgic characters and it really goes far and above to making the world where it takes place as dark and cruel and at the same time funny as Bleedman is known for.

Good comics. Here I'll save you the time and I'll link the others he's done. All of them are really fun to read and all of them are ten times more badass then the art style and content might at first suggest.

http://ppg.snafu-comics.com/?comic_id=0 - PPG Doujinshi - An animé style take on our nostalgic routs as children featuring Dexter, Samurai Jack, Courage the Cowardly Dog and a load of other names you should recognise from your youth. Like grim tales it takes the Idea of a simple nostalgic kids show and twists it into a quite savage and dark tale just not to the same degree. Loaded with laughs and packed with character!

http://sugar.snafu-comics.com/index.php?comic_id=0 - Sugar Bits - Possibly the biggest testament to Bleedman's skill as a writer of fantasy as this is the only work of his that I know that contains nothing but original characters and no nostalgia. I feel that Grim Tales is better written but this just oozes ceativity. The world in which it takes place initially is one that would normally make my skin just CRAWL but it soon takes a turn down shit creek and shows no sighs of stopping from the get-go. Laugh out loud and cry out loud this is a very good manga.

THere. I know that this is a shameless plug of a site I like and it deviates from the actual tone of the thread so here!

Made using subeta.com because whilst I can write good characters I'm not so good with their drawings.
Zeeri

Well. Here's a new one. My Argent Dawn priest needed a bit of a makeo-- well, not really. I just got gimp again and decided to put my colouring skills to the test! Before and after.